Leadership Aberdeen is a comprehensive leadership training program that provides participants with the opportunity to sharpen their skills, share their experiences, and make life-long connections with fellow participants. 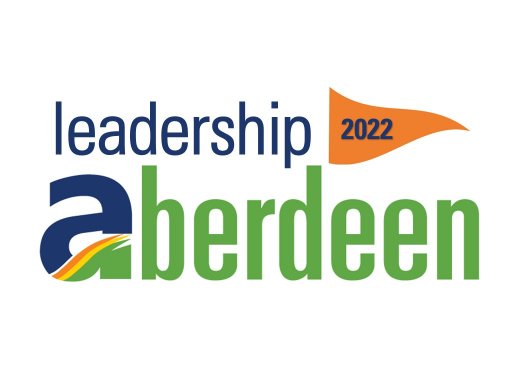 Participants follow a 12-week Positive Leadership curriculum that focuses on growing their individual skills by focusing on leadership attributes. The class also gains broader knowledge of the businesses, opportunities, and challenges in our community through tours of local businesses and hearing from local leaders on company philosophies, goals, and success stories. Plus the class gives back to the community by facilitating a local project or event that will have a positive impact on the Aberdeen community.

A big part of the program’s success is due to the partnerships we have with local businesses that help deliver the program. Special thanks to the 2022 Business Partners which include: 3M Company of Aberdeen, Agtegra Cooperative, Avera St. Luke’s, Dacotah Bank, Glacial Lakes Energy, Northern State University, Presentation College, and Sanford Health. We couldn’t do it without you!

2005: The class hosted a “Taste of the World” event where different foods from different cultures were highlighted as way to help the community be more understanding and welcoming of different cultures. The event raised approximately $1600 that was donated to the Dacotah Prairie Museum

2006: The class hosted the “Community Cares Music Fest” at Presentation College’s Strode Center and featured nine local musical acts from grade school groups to adults. Close to $2000 was raised by admission tickets and presented to local military troops and their families.

2007: The class used information compiled by Catalytix to engage young people and showcase what our community had available to them. The SOAR event (Students, Opportunities, Activities and Resources) was held at both Aberdeen middle schools and close to 35 organizations promoted what they had to offer to students.

2008: The class organized a “Link to Life” event that was held in conjunction with the Spring Job Fair. The class served as community ambassadors, visiting with job seekers on resources and opportunities available to them in Aberdeen. Aberdeen continues to have a booth at each job fair which showcases the community.

2009: The class project was “Pay it Forward” and focused on securing volunteers for community service clubs and organizations. The class organized a service club fair in conjunction with the Great Outdoor Show in an effort to get more people volunteering in the community.

2010: The class held and event called ”All About Aberdeen: Discover the People, Discover the Fun” where they set up a carnival-type atmosphere which included games, snacks and prizes. It was held at Roncalli Elementary School and was designed to bring the community together to have fun and find out what Aberdeen has to offer families.

2011: The class hosted an event called “A Tall for them All” which was a kick-off for the newly formed Sidekicks mentoring program. The class raised money for the program and secured “talls” (mentors) and “smalls” (youth participants).

2012: The class worked with Volunteers of America Dakota’s to develop The Children’s Closet. They physically set up the store with donated items from the community and donated funds to the organization. The VOA uses the closet as a way to incent and assist program participants.

2013: The class held a “SNOLF” Snow Golf Tournament at Wylie Lake to raise awareness and money for juvenile diabetes. The class donated over $8,000 to Camp Gilbert from business donations and team registration fees.

2014: The class held “A Goal For Safe Harbor” event to raise funds for the Safe Harbor new building campaign and to raise awareness of Domestic Violence. The class held the event during an Aberdeen Wings Games and raised more $35,000 through business donations, the shoot out and raffle.

2015: The class opened the “Help Build It Center” for Hub Area Habitat for Humanity. The store sells donated construction and household renovation items. They raised over $6,000 to go towards the center and to help the organization to build Habitat homes in our area as well as other habitat for Humanity programs.

2016: The class raised over $16,000 for Spurs of Aberdeen. They held a “Horse Pie Bingo” event, bake sale and raffle. Spurs used the funds to build a barn and coral at their facility. The group was also able to work with local companies and contractors to donate time and equipment for the building project.

2017: The class hosted the 1st Annual Day of Distinction to provide people in the Aberdeen area to gather with their peers and listen to five locally and nationally recognized speakers for personal and professional development. The class donated $1000 to the Boys and Girls Club.

2018: The Class worked with local artists to refurbish “ghost advertising signs” in the downtown Area. The project is still continuing today with 6 total signs completed to date in the downtown area.

2019: The class hosted “Night In A Car For Journey Home” to raise awareness about homelessness in our community. They raised $20,000 for The Journey Home.

2020: The class facilitated the Hub City Hound Contest, a photo contest and fundraiser in support of the Aberdeen Area Humane Society campaign for a new building. They raised $21,130 for the Humane Society.

2021: The class organized “Ask Me About Aberdeen” where participants set up booths at community events to welcome newcomers with information and Aberdeen “swag” bags.